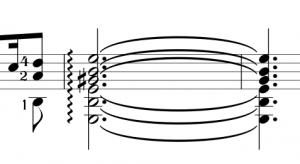 Guitarists roll a lot of chords, but should we?

A rolled chord is an effect rather than a constant technique. When you roll a chord (especially in Bach) it throws off the beat. A chord that was previously supposed to occupy, say an eighth note, is now spread over an entire beat. Of course, for some styles rolling chords is an expected practice.

But don’t go crazy. Rolling every chord in a piece turn a roll into something that you do all the time – it’s no longer a special effect. Choose where to roll carefully. Sometimes even the ending of a piece is better off understated, and without a rolled chord.

When you do roll a chord, you’ll have to decided when to start it. There’s many options, but I think the main thing to consider is where you want the beat.

If you start the rolled chord before the beat where it’s to be played, the top note, the melody in most cases, will be hit right on the beat. This is a nice effect, and what most people do naturally. The other broad option is to start the roll directly on the beat, which puts the bass note on the beat. Starting on the beat is a great way to keep a bass melody or great bass line in time.

Of course, there are many more options. Just think, “Where do I want the beat to fall in this roll,” and make the choice.

Posted on June 25, 2009 in Musical Interpretation and Musicianship