In early 2008 Ben Werdegar saw a story about Iraqi children needing wheelchairs and knew he had to find a way to help. 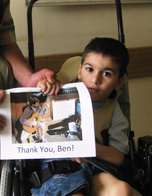 Two years and $18,500 later, 13-year-old Ben is truly making a difference through his music. “I’m just trying to reach peace one child at a time. Even if the child is on the other side of the world.”

Ben’s passion for music began on an outing with his father when he was two years old. He saw a homeless man playing the guitar outside a Starbucks in Palo Alto, California and immediately after getting home, Ben picked up his toy guitar and didn’t put it down. At the age of three he started the Suzuki learning method with Frank Longay and ten years later Ben is still studying at the Longay Conservatory of Guitar in Santa Clara, California.

Ben’s arts leadership began when his mom showed him an email with pictures of Iraqi children who needed wheelchairs, and a story about how American Brad Blauser (a 2009 CNN Hero) was helping them through his organization, Wheelchairs for Iraqi Kids.

was founded in 2008. It's mission is to share information about the guitar with hobbyist and professional guitarists around the world. Learn more about The Classical Guitar Blog.