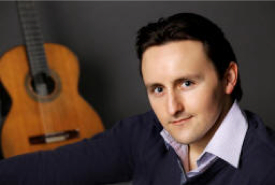 The concert series will start off Saturday, January 15 with young Croatian guitar virtuoso ROBERT BELINIĆ. Robert Belinić won the Young Concert Artists European Auditions in Leipzig, Germany, and was the first guitarist ever to win the Young Concert Artists International Auditions in New York in 2002. Mr. Belinić made his debut in New York sponsored by the Claire Tow Debut Prize and his Washington, DC debut at the Kennedy Center sponsored by the Alexander Kasza-Kasser Prize. He also debuted at the Isabella Stewart Gardner Museum in Boston. Among his many appearances in the US, Mr. Belinić performed at Carnegie’s Weill Recital Hall, and Merkin Concert Hall both in New York, with the La Jolla Music Society, the University of Nebraska at Omaha, Western Michigan University, Southwest Missouri State University, and Cold Spring Harbor Laboratory (NY). In Europe, Mr. Belinić has been heard in Slovenia, Hungary, Poland, Italy, France, Germany, Austria, Lichtenstein, the Czech Republic, and with the Zagreb Philharmonic. Locally, Mr. Belinić will debut with the Sarasota Orchestra, and Rodrigo’s Concierto Aranjuez the weekend prior to his solo recital appearance with GuitarSarasota.

was founded in 2008. It's mission is to share information about the guitar with hobbyist and professional guitarists around the world. Learn more about The Classical Guitar Blog.