I’ve been learning Sor’s Opus 1 and it has two common ambiguities that pop up in old scores. Both these things make it seem like the score is saying things it really isn’t.

A quarter rest in older editions tends to look like a backwards eight rest. In the image below (taken from Sor Op. 1 No. 1), the red box is an eight rest while the green box is a quarter rest. 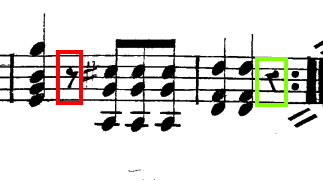 The rest of the context, in this case, makes this really easy to spot. There are times, however, where the texture is thicker and those quarter rests are easy to mistake for eights.

Dotted or double dotted notes tend to get their dots floating places they shouldn’t be. The example below has a dotted half note in the lower voice and a double dotted quarter in the melody. The dots are floating in such a way that they make G and B (in green) staccato. 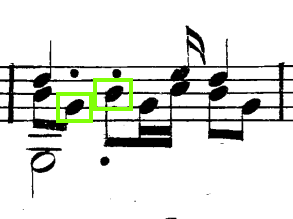 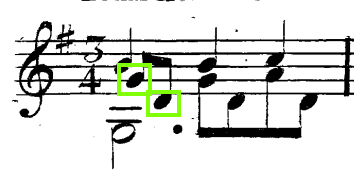 Of these examples of wonky alignment, the second still can happen in modern typesetting. It’s very uncommon to see other marks in places the composer didn’t intend in a modern edition.

These two things barely scratch the surface of all the strange things that can pop up in old scores. More broadly, we need to be careful to look at the larger musical context. If something doesn’t seem to make sense there’s probably a reason for it. Usually that reason is us! mostly us misunderstanding musical typesetting from previous eras.