A friend, who is probably more intelligent than I can ever hope to be, suggested that I start a column called “Music Theory Fridays” as a medium for talking about this whole music theory thing.

Today we’re going to talk about the chords that are found naturally in a major scale. Last week I talked about some of the basics. Included in there was a great link to some tutorials on music theory. With any luck you’ve done the tutorial on scales and the tutorial on chords. Those two you have a pretty fair grasp on how chords work.

Chords, or triads, are three notes played at once. Each tried has a root, third and fifth. The third determines the chord quality. A major third (four half-steps or frets) and a perfect fifth (seven half-steps or frets) makes a major chord. A minor third (three half-steps/frets) and a perfect fifth (seven half-steps/frets) makes a minor chord. Here’s a few chord diagrams that show what these triads look like on the guitar.  The roots are the red ones.  See here for instructions on reading chord diagrams. 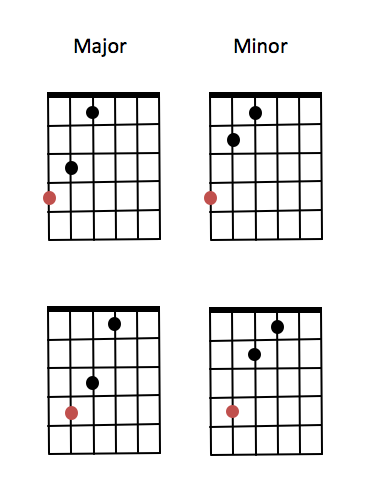 If we take the major scale and stack third on top of each note we get a series of seven triads.  The roots are in black, the thirds in red and the fifths in green.

Each chord does have a specific function, but that’s another post!  The assingment:  practice writing the triads in each key (only 11 more).  Try doing the same with the relative minor. Remember that a relative minor has the same key signature as a major key. So G major and E minor are relative keys. Another way to think of it: the relative minor’s tonic/root is three half steps (a minor third) lower than a major tonic/root. Write in the third and fifth above the minor scale degrees and analyze what chords happen.