This is a guest post from Tony Morris, the guitarist behind Classical Guitar Alive! a weekly radio show dedicated to classical guitar. Connect with Tony on Facebook. 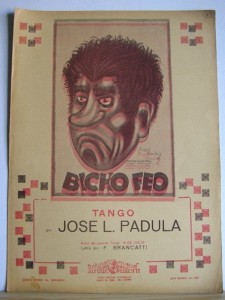 For those who have been following the recent news of the discovery of two recordings by Rico Stover and Federico Sheppard of Augustin Barrios Mangore’s legendary long-lost encore piece, “Bicho Feo”:

But first a recap, for those joining this story.

“Bicho Feo-tango humoristico” was one of Agustin Barrios Mangore’s favorite concert pieces. It appeared many times on his concert programs. According to contemporary accounts, it was a humorous piece that always delighted his audiences. However, a manuscript of this piece has never surfaced. Barrios himself recorded the piece in 1913-1914 on the Atlanta Record label.

Federico Sheppard very kindly sent me a copy of his recording, and shortly later, Rico Stover’s copy was reissued on Chanterelle Records. From both recordings, I transcribed the piece by ear and with the aid of the “Transcribe” software. I performed the piece in a charity concert benefiting Hospice Austin on June 4, 2009, which, to my knowledge, was the US premiere, and the first performance of the piece since the death of Agustin Barrios Mangore.

I then entered my handwritten transcription into Finale software, and sent it out to various scholars. Matanya Ophee commented (I paraphrase) “Hmmm. This sounds familiar. I think this may not be an original Barrios composition, but actually an arrangement of someone else’s piece!.”

Today, I purchased online from the same Buenos Aires antique record store a copy of the sheet music to “Bicho Feo”! But, it is by JOSE L. PADULA, a pianist tango composer!

Well, as they used to say on the radio mystery shows back in the olden days, “Stay tuned!”.

I purchased the sheet music, and it has been shipped. I’ll let you know if indeed Barrios’s “Bicho Feo” is in fact an original composition, or an arrangement of another composer’s work!!!!