An appoggiatura is an ornament written with small (grace) notes. Take this example of Giuliani’s Op. 45: 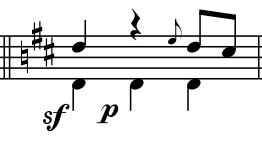 The question for performs is where to “place” this appoggiatura. Does it come on beat three? Or before it? There’s plenty of clues for us in the literature.

Carulli states that, “The Small notes are notes of ornamentation … which takes half of it’s value from the note which follows.”2 Carulli is also kind enough to include an ornamentation table which give examples and realizations of appoggiaturas. 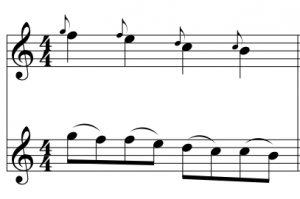 The two sources listed above take care of the placement of our example appoggiatura: on the beat. But how to physically play these things? Again, Aguado gives us clues in his method, stating that appoggiaturas (in their various forms) are slurred.3 Giuliani, in his opus one, says the same of appoggiaturas.4 Carulli’s slurring in the example above would imply the same.

In short, hammer-on or pull-off those appoggiaturas.

Back to the First Example

The Example from Giuliani above would be performed, according to what we’ve learned, with the appoggiatura placed on the beat, taking up half the following note’s value and be slurred. 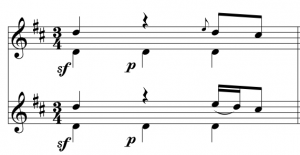 Posted on December 14, 2009 in Musical Interpretation and Musicianship