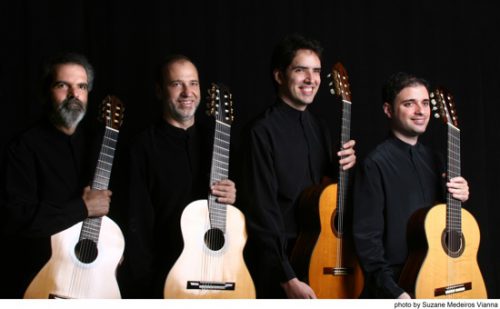 The Brazilian Guitar Quartet was formed in 1998. They’re an interesting ensemble that performs a variety of works, including a lot of transcriptions. When the Villa-Lobos CD landed on my desk, I didn’t think much of it. Another guitar CD of all Villa-Lobos? What’s the big deal?

Suffice it to say this is not your typical Villa-Lobos CD. This album is a collection of transcriptions: Villa-Lobos’ piano and string quartet music rendered for guitar quartet.

The CD opens with Suite Floral, a Debussy-esque work originally for piano. Suite Floral is a three movement work full of wandering melodies, a very free sense of development, and the clear sectional forms we hear in Villa-Lobos’ guitar music. Frankly, this was my favorite work of the CD.

As soon as Suite Floral started playing I was struck by how tight and together the BGQ was. The ensemble playing is excellent. In addition, there’s never in any question what the guys in the quartet want you to hear: melodies are brought out, and other interesting musical features ring through.

Three piano transcriptions follow Suite Floral, all from the work Cirandas. A Canoa Virou is a fun little piece that has a very typical Brazilian sound. A Condessa is a slower work that would sound like a lullabye if it weren’t for some interesting dissonances in the accompaniment. Terezinha de Jesus begins with a bold homophonic statement then becomes a typical Brazilian sounding work. All the works were beautifully played, and after this far I began to get a sense of how much thought went into the programming of this CD.

The next work on the CD is a transcription of Villa-Lobos’ fifth string quartet. The first movement opens with strummed chords underneath short, scalar melodic fragments that are repeated and imitated. Like much of Villa-Lobos’ guitar works, this movement is very sectional without any real transitions. The bold opening is followed by a more subdued middle section that features syncopated melodies and accompaniments interrupted by scalar passages that allude to the opening. The second movement is a quick one to start with, using the same scalar passages as the first movement, but this time as accompaniment. After an energetic opening, however, the piece moves into a slower, more subdued section, then picks back up. Villa-Lobos’ use of short, imitative fragments remains in this movement. Andantino, the third movement, opens with homophonic chords similar to the first movement. It then moves into a texture familiar to the rest of the piece: two or three guitarists accompanying, with one or two playing the melody. This particular movement was the first time you really get to hear one of the Quartets more interesting features: two 8 string guitars. Some of the bass parts in the third movement demand the lower string. The final movement of the work opens with some dissonance building up to a break out melody that features abrupt leaps and the same scalar sounds as the first movement.

Three pieces from Danças Características Africanas, another piano work, are next on the CD. Farrapós is subtitled, “young people’s dance,” which it clearly is. The melodies are simple, folky-sounding and syncopated. Kankukus is an elder’s dance, and its definitely a bit more adult sounding with a more complex melody and interesting dissonances. Kankikis is a children’s dance, and has some fun, angular melodies.

Cirandas, the work for piano from which an earlier set of three pieces on the CD came, makes a reappearance next. A Procura de uma Agulha is the first of this second set. The melody and accompaniment here feature a lot of repeated notes. One of two things usually happen with repeated notes: (1) nothing, the musician doesn’t take time to shape them, or (2) they provide a sense of drive that moves the piece forward. Thankfully number 2 is true in this case. A Procura has a beautiful melody, and it’s perfectly executed. Senhora Dona Sancah followed by Qui Lindos Olhos, another Debussy-esque work with a meandering melody.

This set is not the typical Brazilian faire of the earlier Cirandas set. In fact, it seems as if the Brazilian Guitar Quartet is deliberately taking us away from what we think to be Villa-Lobos due to our over exposure to his guitar music.

This work deserves its own section because its so radically different from every thing else on the CD. The first movement opens with an angular melody in a pair of guitars, and then gets imitated by the other two. Eventually the work moves into a more free development section, like an episode, before returning to the original melody then moving into a middle section. While the middle section is of a radically different character, certain aspects of the original melody remain, holding the work together thematically. A brilliant transition leads the piece back into the original melody.

Andante melancolico, the second movement, is — well it’s melancholy. The texture of the movement in similar to the third movement of the earlier 5th string quartet: homophonic accompaniment in three guitars with one playing the melody. Speaking of melody, it’s time to take a brief interlude to discuss tone and color. The BGQ is good at both — really good. They have an beautiful sound and are adept as using color to reinforce the structure and mood of the piece.

The third movement is a Scherzo that begins with a fun melody and some pseudo imitation and moves into a section that definitely fits the Scherzo title. There’s a lot of dissonance here and Villa-Lobos is clearly playing with the more angular elements of the melodies in the earlier movements. The middle section of this movement is much more consonant with some catch melodies. The Quartet’s two 8 string guitarists come in handy here: low voices abound, and the texture and sound is not something typical for a guitar quartet. The final movement is begins dramatically, with a few extended techniques in use to create sounds similar to a string player moving the bow back and forth quickly. As dramatically as it begins, however, the final movement moves in a more subdued section shortly after opening.

Villa-Lobos has far more to offer, it seems, than most of us are aware. And the members of the Brazilian Guitar Quartet, with their ensemble excellence and interpretive powers, are well qualified to show us just what that is.