Jon Mendle is a young classical guitarist who performs on seven- and eleven-string guitars. A graduate of the San Francisco Conservatory, he has recently released an album of 18th century German music by C.P.E. Bach, Flanckenhagen, and Weiss, entiled L’Infidele and available through In A Circle Records. In this interview Jon talks about his approach to extended-range guitars, his experience performing with Yo-Yo Ma’s Silk Road Ensemble, and more. 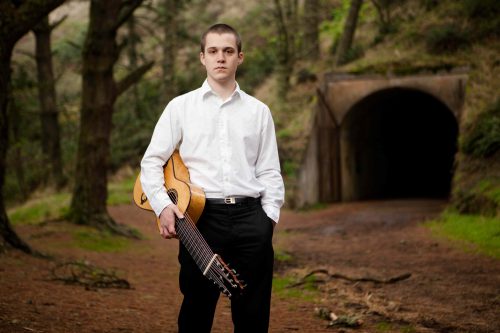 ClassicalGuitar.org: What was the path that led you to the classical guitar? Were you taking formal lesson as a child, or did you start out playing in a different genre, as is the case with many present-day players?

Jon Mendle: I started out playing electric guitar when I was twelve. I actually picked up the guitar kind of on a whim—a friend of mine got one as a birthday present one year and I thought it was really cool. I asked for one for Christmas the same year and Santa came through for me. At first I wanted to learn stuff like Metallica and Rage Against the Machine, then I became interested in shred guitar—got into Joe Satriani, Steve Vai, Marty Friedman, Yngwie Malmsteen, and so forth. That’s how I got interested in finding out what the guitar can really do technically and musically.

A couple of things got me into classical guitar—my first teacher, Matthew Grasso, is an accomplished classical player and he would show me some classical stuff from time to time that would blow my mind. Also, Yngwie Malmsteen, of whom I was a huge fan, always spoke very highly of classical composers like Bach and Paganini, so I started to think that classical music could have more to offer me than rock music.

Hearing Bach on the guitar sealed the deal for me—I knew I had to play classical. The recording that sold me was Segovia playing the Gigue from BWV 997. I fell in love with that piece and worked parts of it out on electric guitar before I had a classical. I got my first classical when I was 15 and haven’t looked back since.

CG.org: You play on extended range instruments, like the 7- and 11-string guitar. How do you approach them?

Jon: I started playing 7 string guitar in 2004, Matt Grasso had been playing one for a while and I became really interested in what the extra range could add to the guitar. I also played an 11 string for the first time that year, but had to wait until I had one built for me in 2007 before I could focus entirely on that instrument.

My approach to the extended range is to utilize it as much as possible, but not in a forced way. I don’t play much 6 string repertoire, because I feel like most music written for guitar is complete as is, and changing or adding basses isn’t always tasteful. And playing that music as-is on an extended range guitar doesn’t do the guitar many favors. I seek out my own repertoire and play mostly my own transcriptions. Almost all of my repertoire is 16th-19th century music. I do play some 20th century music on every concert that I give, though again it’s not the usual fare—pieces by Aaron Jay Kernis, Matt Grasso, or something I’ve written myself. I’ve also played music by the great 11-string guitarist James Kline, who introduced me to the instrument, and I’m currently working on Philip Rosheger’s beautiful “Serenade,” which works great on my guitar. I’m in the process of seeking out new music from living composers for my instrument, and I have at least one piece on the way, so it will be exciting to see where that goes.

CG.org: Earlier in 2011 you released a recording of 18th-century German music, L’Infidele, featuring works by C.P.E. Bach, Falckenhagen, and Weiss, all played on your 11-string archguitar. Tell me about how you went adapting this music to the instrument—two of the works are originally for 13-course lute, and the Bach is a keyboard piece.

Jon: I arranged the music on this album with my guitar in hand—the archguitar has the same range as the 13 course baroque lute, so what was challenging was finding the right fingerings and articulations to do the music justice. Much of it is very idiomatic on the lute but not so much on the guitar, as the instruments have very different tunings. The first 6 strings of my guitar are in standard tuning, whereas the baroque lute’s first 6 courses were tuned to an open d-minor chord. So my approach was to keep the slurring and phrasing style of baroque lute music in mind, but come up with solutions that felt as natural to guitar as the ear allowed.

As for the C.P.E. Bach piece, there are a few licks in there that are ridiculously hard! Again, it was a process of trial and error. I fell in love with the first movement and wanted to see if it would work on my guitar. When it did, I went on to the other two. I took the standard approach of preserving melody and bass first, and then keeping as much of the inner voices as I could.

CG.org: In the summer of 2010 you joined Yo-Yo Ma’s Silk Road Ensemble—a musical group that aims to draw a connection between Western and Eastern musical styles. Could you describe your experience performing with the ensemble?

Jon: Playing with the Silk Road Ensemble was an amazing experience. The Ensemble really feels like a big family, and everyone is really nice, very supportive, and a great musician to boot. Yo-Yo Ma is one of the kindest people you could imagine—he really has a passion for people, and giving back through music is a huge part of his artistic vision. The Ensemble’s outreach programs and his commitment to helping young musicians such as myself are amazing testaments to this.

My biggest take-away from the experience was how the Ensemble works together and rehearses—Yo-Yo motivates through encouragement. I never felt like I was playing with an authority figure, rather he made it feel more like playing with a friend. One might think that this could foster a lack of serious effort, in that he is always very kind in how he gives advice and rehearses, but I don’t think so. I (amazingly) didn’t feel any added pressure working with him—he was very encouraging when things improved or when he liked something. But I know that this wasn’t because it couldn’t be better. Instead, it made me want to give more, to reach the next level in the piece we were working on, rather than stay where I was with it.

The other thing is that Yo-Yo is always trying to learn from the musicians he works with. If he liked something that someone played during a warm-up or rehearsal, he was always curious about it, and would often ask them to teach it to him. The whole group learns form each other in that way, and so it’s “fusion” in every sense of the word.

Jon: Ensemble playing has become a big part of what I do, and performing with both the San Francisco Guitar Quartet and the Pacific Guitar Ensemble has been a lot of fun. The SFGQ is a very progressive group with a focus on 20th/21st century music and works written for us. With the Pacific Guitar Ensemble we also play a fair amount of “chestnuts”, so to speak—Bach, Dowland, Brahms, Mozart—which is great because I love that music and I am very much pro-transcription. The guitar repertoire is just too limited without arrangements.

Both groups are a lot of fun to work with – it’s been an honor to get to perform with some of my professors in the PGE. Sergio Assad is writing us a new piece for mixed ensemble that we are set to premier in the spring which is going to include instruments like electric guitar, bass, oud, steel string acoustic and more—so that’s very exciting and we are looking forward to that. The SFGQ has given me some great opportunities to travel and play—we went to Dresden, Germany, last year, and it’s become one of my favorite cities. This past September we had the honor of opening up for Pepe Romero at the La Guitarra California festival in San Luis Obispo, and that was a blast. I met a lot of great people and heard some absolutely stunning playing by the other artists.

CG.org: What about your solo performance? What are some of your upcoming projects?

Jon: I’ve been playing concerts as much as I can this year in support of my album, and that’s taken me up and down the west coast and into Nevada. As I said, I’m also taking some time to develop different repertoire and seek out new pieces for my 11-string. I hope to play some more concerts in 2012, and start thinking about a new album then too. I think my next album will be more eclectic than my first, with some 21st century music as well as some early music. I’d love to record something very dark, like Dowland or one of the Weiss Tombeaus. And I also want to record my version of Mertz’s Fantasie Hongroise, which was originally written for 10 string guitar with a low A. I can play it with all the original bass notes on the archguitar, and it’s quite a different experience hearing it that way. So that’s a bit of what’s to come.

CG.org: Thanks so much for your time and your insightful responses, Jon. All the best to your multiple endeavors!

Posted on December 14, 2011 in Interviews with Classical Guitarists