How often is it that, as musicians, we find ourselves stuck, seemingly unable to move forward, get better, or grow, simply put: we have reached a “plateau”? The truth is that this is a universal occurrence; there is not a single player out there that has not encountered this regardless if they are a guitarist, violinist or even a conductor. How is it possible then, that one can overcome such a seemingly immense problem? The answer is as difficult as the problem; the reality is there are multiple answers one of which I will talk about over the course of this article.

Recently I found myself with almost no time to practice, I was in the midst of a life change; I had finished grad school, was expecting my first child and was faced with the prospect of finding consistent work to support my growing family. I first crammed in as much teaching as I could and even began working at Home Depot. Needless to say this leaves little time for practicing guitar. As much as it pained me to take as much time away from my instrument as I was, I found myself realizing new things about playing, practicing and how better to use my time, which was essential. This is where I realized a tremendous way to get over the “plateau” hump and push forward into new territory.

Instead of the hours of time I previously had to practice, I now had an hour here and there and either had to just play and enjoy myself or find a way to get better. What I realized is, if I changed how I thought about a passage of music I was working on it made it easier. When I found myself struggling to get something in my fingers I started to look at it, analyze, immerse myself if you will and this is when I realized that if I think of something as “complicated” instead of “difficult” the ensuing work I did was much more stress free. Before dismissing this as simple rhetoric, consider the definitions of these words. As defined by the American Heritage College Dictionary, complicated is defined as containing intricately combined or involved parts. Difficult is defined as hard to do or accomplish; demanding considerable effort or skill; arduous. How much more telling can one get than that?

It is my belief that looking at a piece of music, a phrase, measure or beat as complicated instead of difficult a practicing musician can subsequently set themselves up for success. The results of this mental change for me has resulted in a much deeper understanding of the piece I am playing because I am not simply relying on multitudes of repetitions, believing that “hard work and perseverance” will be the answer. I find myself instead, looking at the most basic elements, what are the notes? What is the rhythm? What is the shape of the phrase? Dynamics, fingerings, both right and left hand events as well as countless other details I know I am supposed to look at when practicing but often times gloss over. Choosing to look at music as

something of a puzzle, both to be put together and taken apart, demystifies it in a way that is far less intimidating and much more enjoyable. The added benefit is that being deeply immersed in a piece, whether it is the Capriccio Diabolico or Sor’s study in B minor, has lasting effects and will carry into the next piece you learn, which, is one of the goals of practicing.

Is Change Your Perspective the Answer

Is this simple play on words the answer? No. Is this one answer? Yes. I do not believe that this will work for everyone, but it did work for me. It has made my practicing much more enjoyable and productive. Instead of looking at the guitar wondering how I can learn this piece, beat it into submission and will it into concert readiness I take joy in finding the loopholes that make it easier. The best players, the ones we all look up to, practice this way, they are not repeating passages endlessly, they are finding the small things to work on, the items that seem negligible, but when added up are huge. Change your perspective; you may like the way it feels, and ultimately, the way it sounds. 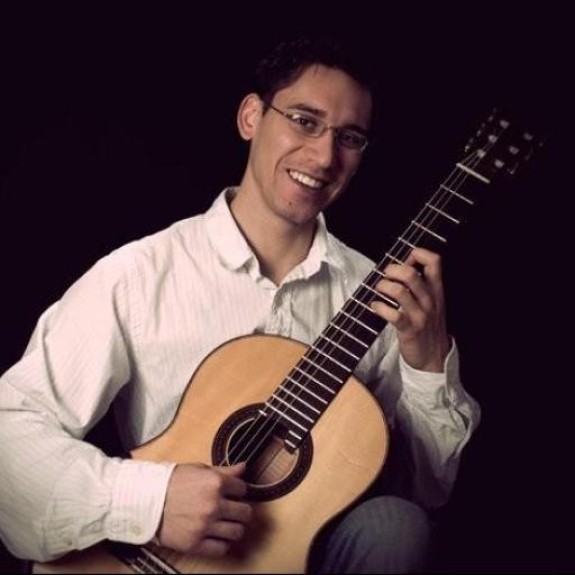 Seth Guillen began his classical guitar studies at the age of 24 with Findlay, Ohio guitarist Dave Phillips. After a few months Seth began to work privately with Dr. Matthew Ardizzone and eventually went on to study with Stephen Aron and Dr. Stanley Yates. Seth holds a masters degree in guitar performance and works as a freelance guitarist in Nashville, TN.