Last Week we talked about the chords in a major scale. We discussed how roman numerals work, and how we label chords with them.

By far the two “most important” chords are Tonic, I, and Dominant, V. These are really the two structural chords in music up until about 1900ish. This is because tonic and dominant voice lead, or move from one another, smoothly. What happens is that the bass voice moves in one of the strongest intervals (the ascending fourth or descending fifth) while the other voices move stepwise. The result is that Dominant very forcefully moves to I.

Most music can really be summed up as a statement of tonic or key area, a departure from tonic then a return to the original key area through its dominant.

On the guitar, a simple I V I progression in C major looks like this:

There’s a few things to notice. First is the bass, or lowest voice. C – G – C. Notice the ascending fourth from G to C as I mentioned before. Also notice that one tone stays in common between all the chords: G on the 2nd line of the staff. Notice the other middle voice: C – B – C, B functions as a neighbor tone to C. B is also a special note in this key. It’s the seventh note of the scale (or scale degree) and has a name: the leading tone. So called because it really has a strong tendency to resolve upwards to C or tonic.  Combine the bass motion with a strong leading tone tendency and we have the reason why V wants to move to I. The final, top voice moves E- G- G which isn’t especially strong.

V can also be made stronger by adding a 7th to the chord. That just means we stack another note on top of the chord (add another note a minor third above the fifth or a minor 7th above the bass). For a review of seventh chords see here. The chord we construct when adding a note to V is a dominant 7th chord.

On the guitar, a I V7 I chord progression looks like this:

There’s a few rules on how to resolve V or V7 into I.

Like all rules, there are exceptions.  But for now the exceptions don’t exist.

By far the best way to real get a sense of how to see and here this V- I motion is to write it out. So, let’s do another key: G major. So, step one, construct the scale and get the note vocabulary out there and visual:

So we find the chords we’ll use and stack them up in thirds. In this case those are the chord built on the first and fifth scale degrees:

By doing it this way, you can clearly see what notes need to be in each chords. Now the final step is to put the progression I V7 I in notation in a way that would be playable on the guitar. Start by putting in the bass voice, then fill in the upper voices: 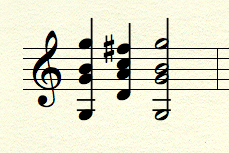 Just as with C major, the voices move stepwise. Here it’s a bit different because the G chord doesn’t have a fifth (which is legal, the root and third are the most important).  In the key of G F# is our leading tone, and it moves upward to G as V7 moves to I.  The 7th C, resolves downward to B.

Work on writing out a few I – V – I progressions in different keys. The keys of D, A, E and F major will work well.